Hi! 🙂 Welcome to my first Musing, these will basically succeed my The Spin articles at Sonic Stadium and my Look over threads at GAF, today we’re going to look over a couple of companies named Arzest and Artoon, which are more-or-less one and the same, but we’ll go over that.

Why not start from the beginning with Artoon and its origins:

Artoon was formed by three people; Naoto Ohshima, Yoji Ishii, and Yutaka Sugano. Naoto Ohshima should be familiar to any Sonic fans for being one of his creators, he specifically designed the appearance of both Sonic and Dr. Eggman. The other two are also from Sega, but are more known for other things, Yoji Ishii had a huge hand in some of Sega’s greatest arcade hits in the 80’s and early 90’s. He also created and designed the game Flicky, the bird from that game of the same name is now part of the Sonic series since day 1. Yutaka Sugano is most famous for his work on the Panzer Dragoon series, having a very large part if the original games. Most of the whole company consisted of folks from across Sega. The team’s last game before forming the company was Sonic Adventure on the DC!

The first game by Artoon was Pinobee for the GBA and was ported to PS1 afterward, then they made Blinx the Time Sweeper on the original Xbox with Microsoft. Both continuing the team’s legacy (particular Sonic’s) with new 2D and 3D mascot platformers. Eventually Nintendo hooked up with them and had them develop an all-new Yoshi game on the GBA called Yoshi’s Topsy-Turvy, a bit later they also developed Yoshi’s Island DS. Artoon also was a common collaborator with Mistwalker, having made Blue Dragon on 360, Away: Shuffle Dungeon on DS, and The Last Story on Wii, which would be Artoon’s last game. Artoon also worked with Nintendo to create an all-new IP called Flingsmash on the Wii where you play as a smiling ball you whack with the Wiimote like a ping pong ball through an auto-scrolling course. Hey, at least it’s original!

Back at around 2005, the team was bought by a company called AQ Interactive, and then in 2010, it was announced that AQ would absorb the company outright and the Artoon name would cease to exist, with Flingsmash being the final game to use the Artoon name well after since the game got constantly delayed, not arriving until the end of 2010.

The folks there would understandably not be too happy with that arrangement, so, they left! In June 2010, all the founders and many folks from Artoon, formed a new company called Arzest.

Arzest’s first duty was actually again working with Nintendo, this time coming up with mini-games for Wii Play Motion. BUT WAIT, another company was also involved with this game coming up with their own mini-games. Now who was that again?

NO WAY, you mean the company that was formed by Yuji Naka after he left Sega in 2006? YES!

You know what this means? This means that for the first time since Sonic Adventure, Yuji Naka and Naoto Ohshima worked on the same game!

Arzest made the mini-games Cone Zone, Jump Park, and Spooky Search, while Prope only made Trigger Twist.

What’s amazing, is that both Yuji Naka and Naoto Ohshima pitched their own ghost-based mini-games. I am dead serious.

Yuji Naka said this about it in the Iwata Asks for the game:

Right. But it got shelved it. When this project came up, we worked on it some more and made a prototype, but it clashed with Oshima-san’s project. They were both about ghosts. Ours was removed from competition, but in the two weeks left for prototypes, we made Trigger Twist.

So anyway, once that was done, after doing some character model work for the originally announced 3DS-exclusive Time Travellers, the team also went on to help work on the 3DS Mii Plaza where they added SpotPass support for the games Find Mii, Find Mii II, StreetPass Map and Puzzle Swap. However, Arzest and Nintendo would finally work together on full retail game together fully by Arzest, that would be Yoshi’s New Island on the 3DS.

Yes, it has its flaws (looking at you Yoshi Clan song, though that was composed by Chamy Ishi who worked for T’s Music), but it was a good game in its own right, even if it wasn’t a worthy follow-up to the original Yoshi’s Island IMO. Oh and the director is the same as the director of Knuckles Chaotix no less.

Point is that the team is full of people from Sega’s golden era, they are not to be underestimated, they just need to be put on better projects, no more Yoshi games from them at least, alright Nintendo? 😛 They need to make new IPs!

Naoto Ohshima also contributed to Terra Battle with new characters, one of which, may seem a tad familiar… 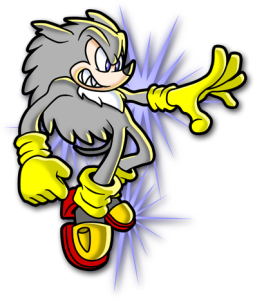 What a minute, you’re not Sonic, this is impossible!

Yeah, what’s even stranger, is that this artwork is closer to the 2D artwork of Sonic Adventure than even Yuji Uekawa’s artwork is today, with the curves and everything. What’s up with that? I wonder if Yuji Uekawa even did the final artwork in that game, I have a hunch this is by Manabu Kusunoki, who is he? He was a very important part of Panzer Dragoon, and he did the CG for games like Pinobee and Flingsmash at Artoon, he also did art for Arzest’s mobile game Slot Monsters. According to this he is at Arzest, he also helped out on Terra Battle also like Ohshima. From what I’ve seen of his style, he may well have been responsible for the CG art in Sonic Adventure, especially as that style was not replicated in SA2 and onward (SA2 barely had CG art to begin with), and those look similar to Pinobee and Flingsmash’s art which he is confirmed to have made, so in this case it’s not that unlikely he actually did the final 2D artwork that perhaps Uekawa started. Hell Creative Uncut actually credits the artwork in SA1 as Yuji Uekawa (initial concepts, completed by secondary artists), most interesting.

So to conclude, Arzest if given the freedom and backing (specifically by Nintendo), they can do some great things, I just want to see that happen, I want to see them create a beautiful world for a new mascot 3D platformer that’s full of charm and creativity from the minds of Sega’s past.

What are your thoughts? 🙂 Let me know in the comments!