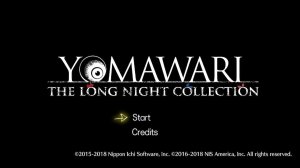 So both games are now on Switch in one single package with both games in one cart. How are the games? Let’s find out. 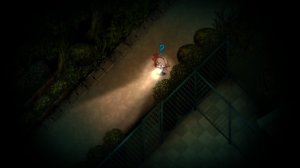 Before I go on, this needs to be stressed, and I mean STRESSED; this game is not for the faint of heart. Both games deal with very depressing themes. This game WILL make you very depressed if you’re not ready for it. The first game, Night Alone, is rated T while the sequel Midnight Shadows is rated M. Frankly I think Night Alone should’ve been M-rated personally. It’s DARK, and legit uncomfortable. Also a warning that there are some jump scares, where things will burst at the screen instantly… Now that I got that out of way, I’ll get to the games themselves.

Let’s start with Night Alone. You play as an unnamed girl who’s out on a walk with her cute little doggy named Poro during a quiet night. You’re walking down a road, and then a minor tutorial begins. You’re taught how move, how to run by holding the R button, and how to tip-toe by holding the L button. Next you’re introduced to the mechanic of picking up and collecting items, by simply pressing A at a sparkling spot on the floor. You first pick up a pebble. You then are told to throw the pebble with the Y button, and you play fetch with Poro with the pebble. 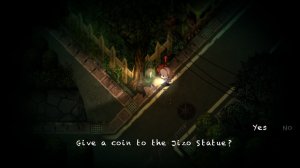 A look at a Jizo statue (Night Alone)

AND THEN PORO GETS HIT BY A TRUCK. The screen goes black in this instance, and upon waking back up, you just see the girl, unharmed, but you also see the giant streak of blood on the road. Yep, this is what you’re getting into, and this is just in the first couple of minutes. The girl then goes back home, and her sister asks where Poro is. The girl doesn’t answer, and the sis thinks that Poro is simply missing and goes out to find him (umm). Later, you notice the sister hasn’t returned, so you decide to go searching for her, and that’s when the game begins proper.

You find yourself in a bizarrely abandoned town (seriously, where is everyone?). You don’t find people, but rather creepy spirits wandering about, and obviously you need to avoid them or else SPLAT, blood splatters on the screen and you die. The girl uses her flashlight to help light her way around town (also used to see some spirits who are invisible otherwise). A major mechanic is the heartbeat system where a bar/meter appears on the bottom screen when you run, or when evil spirits are close. The longer you run, the smaller it gets and the more tired you get. You’re also able to hide in objects such as bushes and signs, usually in story sequences to avoid spirits. 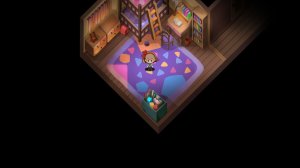 Your house, where you can save the game (Night Alone)

Your goal is basically to get from place-to-place alive. Luckily there are Jizo statues scattered around. These are your quick-save checkpoints. You collect coins in addition to the pebbles on the floor. Coins are your offerings to the statues in order to quick-save. Note that these are just temporary, but thankfully you can just warp home anytime via the map by pressing the + button to access said map, and hit Y to warp home. Here you can save properly for free in your journal. You don’t lose anything by warping home aside from the quick-save. Said quick-saves are important because when you die, you restart from said point.

With the aforementioned map, you are able to find your way around town. The map is basic at first, but the lines showing the streets fill as you walk throughout, but key points like your home, the school, etc are marked from the start. Along the way you may have to solve puzzles by collecting certain items, or use one item for specific uses, such as a shovel for digging up dirt piles. There’s a definite puzzle element in the game. Honestly it’s like a point-and-click game, but with out the pointing and clicking, if that makes sense. Just my observation.

Next let’s get to Midnight Shadows. The game is mostly identical, but with some differences. For one, there’s more of a dynamic story since you essentially play as two girls, this time named Yui and Haru. I won’t spoil what happens this time in the beginning, but umm, yeah, expect something very dark, and it’s not even bloody…

The girls after this part head home after a fireworks show. Haru gets frightened by a voice calling out to her, and Yui goes to look. Yui then gets taken away by a spirit and Haru is left alone, so she heads home on her own. Throughout the game, you swap between the two girls here and there as they try to find each other again. 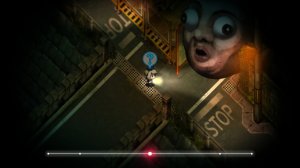 This time there’s a couple of differences and additions to the game. Jizo statues now actually save the game for a coin, but a free option still exists in your home. You can now grab and hold objects, such as pushing a box, or picking up and carrying a box to a new area to open a path or to reach an objective. Also the game has a more linear feel, versus the more open world feel of Night Alone. For some reason, I found myself preferring Midnight Shadows over the original.

Visually both games exclusively use 2D artwork, always from an isometric perspective. There’s some good atmosphere going on if you’re in a mood for, well, a spooky mood. The spirits can be legit creepy looking at times. The girls are too adorable (honestly making it more uneasy since you’re legit worried for them). It’s worth noting that Night Alone’s roots on Vita are evident since some things look rather low-res, such as signs where they’re too blurry to read when they’re up close to the screen, plus the girl looks pixelated during these instances. Midnight Shadows however definitely looks better. Not only are the assets higher-res (makes sense since it came out on PS4 at the same time), but there’s some beautiful layering going on in the beginning where I got a legit Muramasa: The Demon Blade vibe from. The games run at 60fps, which is to be expected. 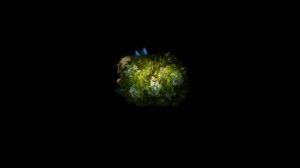 Audio-wise, it’s VERY minimal. There’s no voice-acting at all in both games, just text. There’s subtle music throughout, but only for the atmosphere. Most of the time you hear sound effects such as the heartbeat, creepy sounds in the streets, crows flying away, and of course whatever sounds the different spirits make.

Overall it’s fine for what it is. The games are legit creepy and disturbing, which honestly was a major turn off for me, for real. If you’re into these sorts of games, they seem good and certainly offer legit creepy events and atmosphere. The gameplay’s not very complex aside from the puzzle elements, which as mentioned requires you to sometimes find specific items scattered around to continue on in the story. It’s certainly a decent value being two full games on one cart, which is neat.

You’ll Love:
+ Has a nice art-style, especially Midnight Shadows with the added layer effects and higher-res assets.
+ Audio is minimal to good effect, giving you a legit creepy vibe as you wander around.
+ Two games on one cart is very cool to see.
+ Very emotional. You feel legit concern for the characters in the games.
+ Has screenshot and video capture support.

You’ll Hate:
– The game is legit depressing. Also has jump scares, for those who hate that.
– Not a whole lot to do if you’re not into these sort of games.
– No voice-acting at all.
– Some low-res assets in Night Alone, though only really noticeable when up-close.