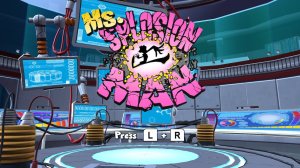 This is a shocker. What we have here is the first ever non-Microsoft console game by the formerly Microsoft-owned developer Twisted Pixel Games. Microsoft bought them back in 2011 but spun them off in 2015. Every one of their projects before and after they were owned by Microsoft were (console-wise) only on Microsoft consoles (exceptions being PC and mobile devices, which Microsoft release games on anyway).

Ms Splosion Man was Twisted Pixel Games’ fourth title (released back in 2011 on Xbox 360) and is the sequel to the original Splosion Man released back in 2009. For the Switch version, Twisted Pixel Games made a number of enhancements. Most notable is the framerate being doubled from 30fps to 60fps, and it’s apparently higher resolution to boot (though I don’t know the exact numbers). HD Rumble is also supported, AND single-Joy-Con play is as well! So how is this game anyway? Read on and find out! 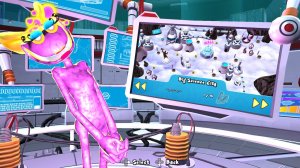 Ms. Splosion Man features this pink human-shaped being of the same name who was created in a lab. She’s cooky, crazy, and PINK! She’s quite literally BURSTING with personality (and many one-liners!). The name of the game is quite literally as the game is titled; SPLODING! Sploding is the key to making it from point A to point B in levels. Let’s go over the details.

The game is a 2.5D platformer. There’s only two things you need to use in the game; the d-pad or the control stick, and any of the face buttons. It’s a one button game during gameplay. The face buttons (ABXY) are your splode buttons, and when and where you splode is key. 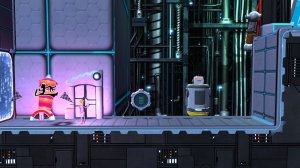 A look at the first level.

Quick note, the game features a brief tutorial in the first level which is shown as a funny how-to video, and here the Pink Ms. Splosion Man character is addressed as Sarah (and a yellow one as Debbie), so make of that what you will, since I don’t think it’s her canonical name. Sarah in said video has a more red bow though as opposed to the yellow one Ms. Splosion Man has, so… I guess they’re not the “same”?

Anyway, sploding for one is limited to three at a time, or it can be seen as a triple jump. You recharge quickly by touching the ground, sliding on a wall (though recharges take longer), or sploding on a barrel. Barrels normally come in three forms; the blue-ringed ones, used as a jump. Black ones, which are bombs that get shot at anything at a distance (usually it’s automatic where it goes). And green ones, which send you VERY far, usually in a specific distance, often used to reach new areas in the level. 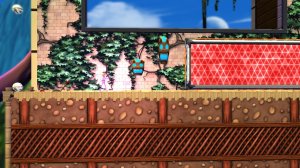 A look at the first level in the second world.

During stages, you also have a number of scientists running away from you, as well as junk like what appears to be vending machines and other things. You can kill the scientists (who explode into deli meats!) and break said junk to earn points by sploding near them. The splodes have a fair range so you don’t have to worry about being pixel-perfect or anything. Another common object are the zip lines. these are long electric poles that you slide through by simply landing on them. You automatically zip along them.

An important element is how said lines end. Those that end straight require you to splode to jump off of them (and you usually jump a fair distance from them). And those that end in an upward angle require you to NOT splode on them since they will fling you off of them on their own. Some levels have multiple zip lines on top of another, and you can drop off zip lines by holding down and pressing a face button. 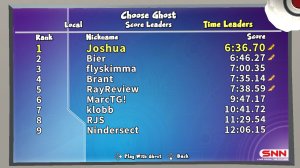 At the end of levels you’re scored based on points and the time it took you to finish the level, with both scores being added to online leaderboards. I actually was #1 time-wise on a couple of stages before the game came out, sadly I’m now I think 3 and 4 in said stages… Anyway, there are also ghosts you can download of the players on the leaderboard, including your own, so you can race them to make sure you get the fastest times. But I don’t think this would help for points though. 😛

There are 50 levels (in both single-player and multiplayer) and 16 are in the first world alone. In the first level (1-1), you fight a boss at the end who tails you (mostly in the background), which is this awesome broken giant robot who stutters one-liners. Definite a highlight character-wise to me. In the last stage in the first world (1-16) you fight another boss (and just that on its own). This one was much longer and required faster reflexes, however this one actually has checkpoints between phases, which you don’t see often and I REALLY appreciated that. 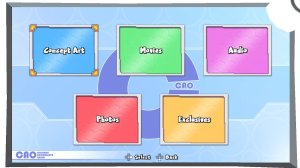 Here are the unlockables in The Mall area.

Upon completing stages you are awarded coins, and these are used in “The Mall” section of the main menu. This is where all of the bonus goodies are. Goodies include concept art, videos, music from the game, and even new modes. These cost anywhere from like 10 coins to even hundreds if I recall. Each comes with a description of said bonus which is a neat addition. My only complaint are that the videos are bizarrely low-quality, like they were 360p YouTube videos, which is odd as this game was made in 2011, so why would they not have HD source videos?

Visually it’s a delight. The framerate is a silky smooth 60fps, far above the 30fps it was on Xbox 360 (just look at any YouTube videos to compare). It looks very high-resolution, maybe 1080p (as if I could tell for certain, ha!) but the real charm is the style and the character animation. There’s so much personality in this game it’s absolutely incredible. I even thought about how Rareware-like this was (ironic with Microsoft owning Rare). That’s top-tier praise. Funny thing is that Twisted Pixel Games is in Austin, Texas. Who else is there? Retro Studios. Honestly even Twisted Pixel Games has Retro beat in the Rareware-style charm. Can Twisted Pixel Games make the next Donkey Kong Country game maybe, please? 😛 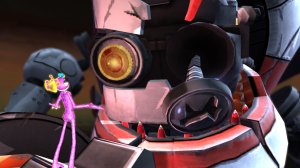 Audio-wise it’s also great. The main theme plays throughout (but not exclusively) and sounds fantastic. Other songs have a more epic orchestral-vibe to them (like when fighting the boss of 1-1). There’s quite a bit of voice-acting to boot. 99% of it comes from Ms. Splosion Man herself, who’s extremely perky and as said spouts loads of one-liners and references. My fav is when she does this “talking on the phone” motion with her hands while running at times, and she speaks like a million words a minute, it’s fantastic! The scientists speak gibberish most of the time but sound hilarious as well. The boss of 1-1 again has full-voice-acting as well, so there’s likely more fully-voiced characters as the game progresses. Fun fact is that the game’s voices were recorded at Okratron 5000, which is run by none other than Christopher Sabat, aka Vegeta and Piccolo. He does numerous voices here as well (The scientists definitely sound like his Yamcha voice). Also you see the original Splosion Man in the intro cutscene when booting up the game. He’s voiced by Sonny Strait, aka Krillin!

Overall this is one hell of a game, if a bit difficult. There’s a LOT of trial and error as you go along, but thankfully checkpoints are numerous and smartly placed. There’s no lives system so you can retry sections to your heart’s content. In fact if you lose enough lives, you can skip to the next checkpoint if you wish. There’s also four-player local and online multiplayer, including local multiplayer with four players on one Switch! This game is just too good to describe. It’s a labor of love from the team and it gets my top recommendation, and it’s only $15 USD and $19 CDN. Seriously, go buy it. Right now.

You’ll Love:
+ Great visuals. 60fps. Personality galore.
+ Audio is great to listen to. The tunes are catchy, the voice-acting is fantastic. Seriously top-tier presentation.
+ Pulling off splodes and the getting the timing right and speed-running the game is legit fun.
+ Online leaderboards are perfect for the speed-runners to boot.
+ LOADS of cool stuff to unlock by earning coins. You’ll stock up pretty quick from replays.
+ Easy to learn, difficult to master.
+ Checkpoints are plentiful and very smartly placed.
+ No lives system, and you even get the option to skip to the next checkpoint if you get stuck.
+ Four-player local and online multiplayer. Including four-players on one Switch locally!
+ Single-Joy-Con play is supported!
+ Has screenshot and video capture support.

You’ll Hate:
– Difficult with lots of trial and error, Be ready for that.
– Unlockable videos are disappointingly low-quality, as if they’re 360p YouTube videos… unless that’s intentional?
– Honestly it can be hard to see where Ms. Splosion Man is when the camera is zoomed out and you’re trying to make precise jumps. You often end up losing sight of her.
– Playing as the original Splosion Man would’ve been a cool bonus. 😛