A potential megaton for veteran fans. This was spotted by P.Scoop at ResetEra, who shared that a user on twitter tweeted an image that was shown at the Magical Mirai event where the game was shown back on Aug 31st. The image showed that Hatsune Miku: Project Diva MegaMix on Switch will actually support the PlayStation button layout, as well as directional arrows in Arcade Mode:

The Japanese text apparently translates to “Arcade”, because the symbols were also used in the arcade game Hatsune Miku: Future Tone, here’s a screenshot: 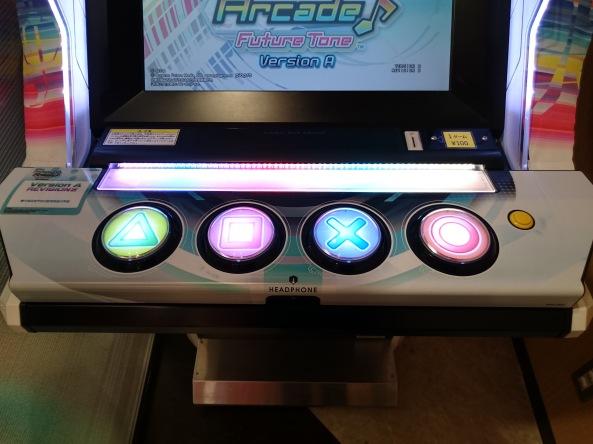 It’s worth noting that Sega’s treasured AM2 division is the team behind not only MegaMix on Switch, but also Future Tone for Arcade and the later PS4 version. MegaMix is actually based on Future Tone as well. Also, AM2 were the ones behind the Hatsune Miku: Project Mirai games for 3DS. Sega had a different in-house team handle the PSP and Vita Project Diva entries for reference.

MegaMix features 101 total songs, with 10 new ones specifically made for the game, and 91 returning ones from prior games. Gematsu has posted the list of all 91 returning songs. Any in there you were hoping would make the cut?

One comment on “Hatsune Miku: Project Diva MegaMix (Switch) let’s you use PlayStation and arrow symbols in Arcade Mode”